Find the natural notes anywhere on the fretboard

Many guitarists aren’t too sure about the notes on the higher parts of the fretboard, especially on the 4th and 5th strings. But it’s a simple matter to put that right if you just focus on the natural notes – i.e. ignore flats and sharps for now. Then you’re left with just seven notes to think about:

Here’s the secret that makes finding notes a breeze: with only two exceptions each note is two frets higher than the one before it. So…  if you’re on A and you want to go to the next note, B, just go up two frets. 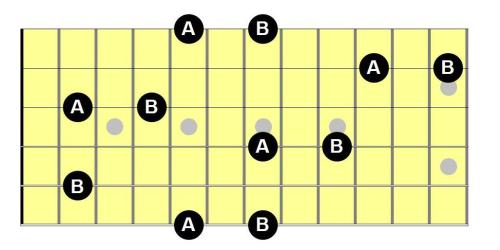 You’ve got to agree, that’s easy!

You probably already know that our starting note is a C. The note after C is D. That’s not one of our exceptions, so it’s two frets higher:

We now go from D to E. Again, it’s not one of our two exceptions, so we go up two frets:

Next move is from E to F. Now that is one of our exceptions, so we go up just one fret this time:

Now we go from F to G, then from G to A, then from A to B. These are all moves of two frets, Finally we go B to C – as one of our exceptions that’s just one fret:

Now pick up your guitar and work out the natural notes on each string in the same way. Or print off this workbook and pencil them in (the second sheet gives you the correct answers to compare with your version.)